Many of us have read about the potential changes we might observe when oil paint dries. Dry oil paints can appear to darken or lighten depending on everything from the absorbancy of the ground (sinking) to the quality of light found where the painting is displayed or stored. The general understanding regarding the later is that dry oil colors in a painting take on color in the dark, and bleach back out in the light. For more on the impact of light on oil colors:

and: Effects of Light Exposure

However, a different phenomenon has recently been making the rounds in some online material forums that has been dubbed “voodoo darkening.” The issue is described as an unexplained significant value change (although mostly darkening) in drying or dry oil paint. It is not a new problem according to many speaking on the issue online, but rather seems to be an issue that has recently caught traction on a few forums as of late. The issue does not seem to be fully attributable to the aforementioned sinking or lighting, but MAY still be related in some way as material gurus like Natural Pigment George O’Hanlon continue to gather data. In an early addressing of an array of questions on this topic, George writes on his Facebook Painting Best Practices page “There is no one culprit in this phenomenon so testing is very difficult.”

However artist Julie Beck from ARA Boston wasted no time and has been doing some informal testing of her own to further explore the phenomenon. She shared the following results online:

This phenomenon, according to online reports and statements, is not limited to any one paint brand or medium. However, many have claimed a strong increase in occurrence when Titanium White is involved. However, fewer report an issue with pure titanium and report that only mixtures seem to produce a value shift. (In fairness though, it would likely seem that pure white shifts would be far less perceptually noticeable.)

Our own @dianedavichcraig had a engagement with this phenomenon recently and was kind enough to record and share her experience:

onionsla2-1 copy1626×740 972 KB
Problem developed of a darker gray stripe right over the onions. Beginnings showing here after putting in the onions and second layer of gray.

onionsla31632×1224 1.46 MB
After covering the dark spot in farther left and farther right spots then a darker spot appeared in the middle parts lacking the touch up (didn’t look like it needed a touch up when touch up was done.)

onionsla61632×1224 833 KB
Then after going over entire gray again (everything from top of the board to the onions) a lighter stripe appeared (hard to see in this photo but it was there) and it was showing up in addition to the darker stripe still evident (but not as much). And it had a slicker texture.

onionsnick1632×1224 1.79 MB
Then as I was oiling out with a makeup sponge I nicked the paint in 2 spots with my fingernail! (No words I can print here) So I slightly sanded and filled in the small nicks.

onionshavelanded3003×1744 2.88 MB
Finally after one more coat only over the stripes, nicks and slickness it resolved.

I will be sure to update this article is more information is brought to light. Please let us know if you have any experiences regarding this phenomenon to share below!

3-23-21 Update: Colleague @Maneesh_Yadav has presented a promising line of investigation on this topic. Read about his effort to explain this phenomenon here:

Julie Beck’s demonstration of voodoo darkening with titanium white and carbon black has really bugged since I saw it. “Darker when wet” is explained well with some fairly easy to understand physics. “Darker when dry” is sort of the exact opposite and doesn’t admit an easy explanation. I was pretty sure it had something to do with the spatial distribution of particles, but hard to do really do anything other than jazz hands. I caught a line in an article about Kubleka-Munk theory on how it wa…

I’ve been puzzling about this for awhile! I remember these exact pictures from Julie Beck when, I think, she posted them on Graydon’s group. I couldn’t provide a good answer as to why it was happening. I put up the question on stack exchange a year and half ago, no good answers:

‘Darker when wet’ has pretty standard explanations, but I can’t figure out ‘darker when dry’. I’ve noticed this with gouache as well, certain mixtures of ivory black and white dry darker.

It’s easy to just jazz hands things away, but I can’t for the life of me come up with something that is plausible. It must be happening in the bulk phase of the paint since oiling out the surface should only make things darker if at all. It’s hard to reason a change in the refractive index of the dried oil, that index creeps up making the paint lighter when the light passes in from air. Can’t be a chemical change to the pigment…

The particles don’t move that fast in the slurry…it’s hard for me to imagine how pigment particle migration might be affecting things…but that’s the only barely plausible toe hold I can grab: some sort of change in the spatial distribution of carbon and titanium white particles as the paint dries. It would explain the fact that you only see this in mixtures (though your note about perception is very good)

Thanks for sharing your insights, ladies!!
Love love love this painting, Diane!!

Adding this recent video of testing from artist Julie Beck: 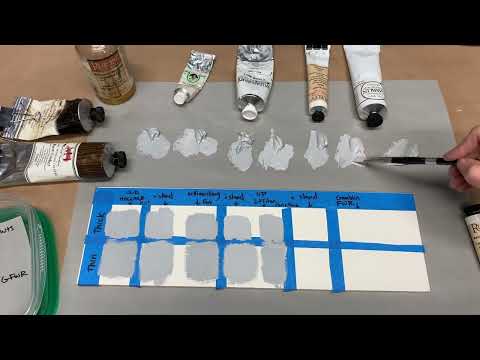