"Although the majority of paintings today are painted on canvas, it is not the best choice for painting—in fact they lead to cracking early in the life of a painting.

For over a hundred years, most of the causes of cracking have been explored: humidity and temperature, expansion and contraction, stress, and paint embrittlement. The symptoms were obvious—cracking and paint loss—but the causes were not clearly understood. In 1982, Marion Mecklenburg and other scientists at the Smithsonian Institute, reported the first systematic explanation of painting mechanics, and especially that of canvas paintings, while other researchers at the Canadian Conservation Institute (CCI) soon followed.

(see CCI video below for issues with canvas and relative humidity)

Canvas is hygroscopic, meaning that it readily absorbs and releases moisture from the environment. As humidity in the air changes, canvas absorbs and releases moisture to maintain equilibrium with these changes. Canvas swells and contracts at much different rates than paint layers, producing mechanical stress on paint as the environment changes. (The environment constantly changes due to changes in temperature and relative humidity.) Although these changes may appear to be small, over time they place much stress on paint, which leads to cracking, cupping and paint loss.

Canvas is a very flexible material that is also biaxial, so it expands and contracts at different rates according to its axes—the weft and warp direction of the yarns. The layers in paintings that carry most of the tension (varnish, paint, ground and size), on the other hand, are composed of amorphous or semi-amorphous polymers that are much less flexible, and expand and contract to a much lesser degree and equally in all directions. These stiffer materials are subjected to much stress as the canvas expands and contract, resulting in cracks and then finally loss of adhesion and cupping (illustrated by the animation). Shock and vibration, low temperature, low humidity, high pigmentation, and aging increase both the stiffness and the likelihood of cracking of these layers." 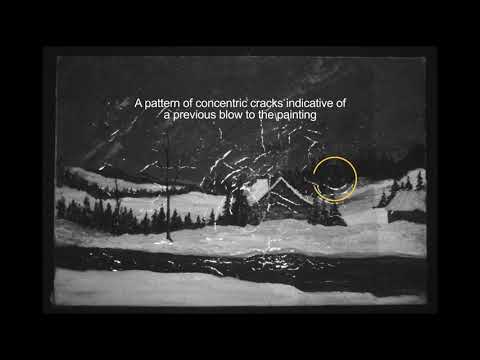 This video demonstrates how very low relative humidity causes cracks to form and expand in an oil painting on canvas. This video was created by the Canadian Conservation Institute.
Transcript:

A video created by the Canadian Conservation Institute demonstrates how very low relative humidity causes cracks to form and expand in an oil painting on canvas. An oil painting, several years old, on sized canvas, with no backing board was placed in a chamber at 50% relative humidity (RH) and keyed out tightly so that any changes in tension would be emphasized.

This video below emphasizes the need to maintain paintings in a normal range of humidity, 40% to 60%, and temperature, around 70º F (21º C). However, this is difficult for the artist to control once a painting is sold and delivered. Painting on a rigid support—especially one that is not affected by changes in the environment (i.e., temperature and relative humidity)—is the best practice to prevent cracking and cleavage of paint.

On Screen: An oil painting, several years old, on sized canvas, with no backing board was placed in a chamber at 50% relative humidity (RH) and keyed out tightly so that any changes in tension would be emphasized. The painting was photographed in normal light (lit from the front with a light source that emits no heat). Then it was photographed again with transmitted light (lit from the back, with a light source that emits no heat) so that light shines through any cracks. [Two photographs of the same painting with different lighting are shown side by side.]

The relative humidity set point in the chamber was dropped in three steps to simulate a drop in RH to very dry conditions:

On day 2, at 35% RH, new fine cracks have opened up.
On day 5, at 25% RH, a pattern of concentric cracks indicative of a previous blow to the painting, and
cracks likely due to heavy impasto are visible.
The time-lapse sequence ends.

To learn more about different types of crack that may form in paint:

Cracks in the Paint by Howard Rehs Materials

How To Safely Navigate The Art Market: Cracks in the Paint written by Howard Rehs of Rehs Galleries, New York. Published here with permission. After I wrote my initial article on water and humidity (many years ago), one of our readers followed up with the following question: If I see a painting and there are cracks in the paint, can I then assume that the reason for this is that there has been some damage from moisture? [age-cracks-300x295] Age Cracks The answer to this question is: No. Mo…

In searching through George’s resources the best I could find is that he says it is “better.” I would think this would be the case as any rigid support (especially ACM) would assist in the resistance of stresses due to the environment. If I come across anything more substantial than “better” I would let you know.

Thanks for posting this, as I’ve long wanted to know about the archival properties of canvas. I personally am not a fan of canvas (because it’s so coarse) but it’s sold directly, ready to go, in the shop and a majority of artists seem to prefer it it – which are two very bad reasons, I suppose, for using it.

Have you ever considered using Aluminium or Dibond? David Eichenberg seems to use it exclusively.

Dibond and ACM panels do seem to be all the rage now. Some of my former students use it and love it. I still like my old untempered Masonite but I’m an old dog set in my ways. LOL! (Kidding aside—if my current substrates were no longer available I would definitely move to ACM.)

Lol, I can understand why you like Masonite, but it seems a bit tricky to get here in the UK. In any case I intend to have a good go at using both and see what seems preferable.