The Problem with Warm and Cool by Paul Foxton

Attached below is a very thorough addressing of how the concept of "temperature (i.e., warm, cool) may be problematic by a very skilled colleague, and fellow instructor, Paul Foxton. The arguments often made against warm/cool as descriptors are that they are inherently vague and not a “real” property of a specific color. Both of these arguments are indeed quite true. What often follows such arguments is the recommendation to use Munsell notation (as shown in this video) to more accurately identify, and navigate this disparity (such notation being a very accurate and precise means by which to navigate color.)

However, I would still argue that these temperature descriptors can be quite useful in many contexts. While they do not communicate an absolute property, they can indeed communicate a perceived disparity, at a particular resolution, relative to another color quite effectively.

Here’s an analogy that I sometimes offer in this regard: Let’s say you are standing in a grocery store aisle in plain view of a store manager. You motion to the manager and ask where a certain brand of spaghetti sauce may be found. He/she responds by stating “to your left”. Now this is an effective, but highly relative instruction. “Left” is not an inherent property of the item, but rather a very coarse, relative descriptor. Indeed, one can be much more accurate by forwarding GPS coordinates to the customer–but such an option may also prove to be far less efficient (and ultimately less effective), RELATIVE to other factors in the context of the scenario.

I would be mindful of this when evaluating the usefulness of any variable of your process. Granularity, efficiency and fluency will always be worthwhile considerations.

Just some food for thought. 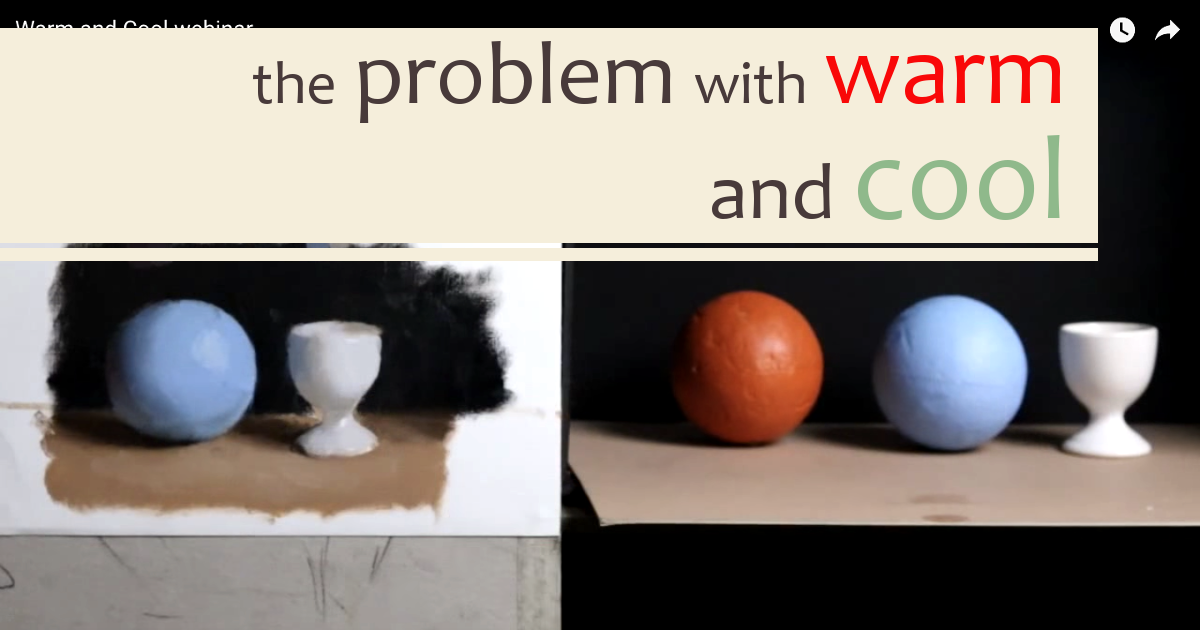 The Problem with Warm and Cool

When I was a beginner, I spent a lot of time doing warm and cool studies. I thought warm and cool was a thing, and it had to be understood. But I really struggled with it. The studies I produced didn't look very realistic. I had an incredibly...

I’ll nitpick this a bit.

For instance, saying something should be cooler could mean a rotation towards blue on the hue circle (generally towards blue). So, an orange might get more red. But it could also mean that it gets less of the blue opponent color, which for orange would be to lose chroma.

To use your grocery store analogy, I’d say warm/cool is more like asking where the spaghetti sauce is, and the response is “Sideways!”. (I know it’s not a perfect use of the analogy, but you get my drift).

Giving exact Munsell notation would be more like GPS coordinates. I agree that’s not usually necessary. In describing colors to myself and to my students, I’ve found the following to be good enough:

I might get more specific with a number for value, but it’s so dependent on the context of the painting that it would usually be something like “it’s like a 7 or 8”.

That being said, I do think warm and cool are important compositionally for the overall feeling of the piece. As Paul mentioned in his article, it may have something to do with the shift in light color as it changes temperature.

Anyway, fun to geek out on this stuff

Thanks for the great discussion.

Interesting thoughts on the issue Tim! The idea of warm/cool colors can indeed be vague In many scenarios but I think that the general usefulness of such “descriptors” is often argued in equally problematic ways (e.g., arguing against the usefulness of such descriptors by demonstrating the challenges inherent in determining which hues are quantitatively the “warmest” or “coolest”.) Again, the idea of a fish trying to climb a tree comes to mind here.

With that said, I would have to disagree with the change to the more coarse “sideways” regarding the store analogy. I would agree that the “dimension” is an appropriate one (associating it with the often horizontal hue/chroma plane) however I’d still stand by the (arguably) more specific, “left.”

I say this as a very common argument for warm/cool as problematic, in regards to wheel direction, is that from some points it may seem that both “directions” can be appropriate based on a direction of “warmer.” For example, from a certain point within categorical blue–some might see both wheel directions as a viable path toward something “warmer” relative to the starting point (one route towards yellow, one towards red relative to the blue.) As you might be starting to suspect, this same argument would seem to hold with the grocery store analogy as one can be oriented in such a way where both rotations can be arguably, metaphorically “warmer” in regards to the location of the target item relative to both the customer as well as the reference factors relative to the directing employee. Granted this analogy can seem to quickly become conflated with so many metaphorical mechanisms in play—but keep in mind that we are essentially arguing over which direction of rotation might be ideal on a “wheel” that is not necessarily itself, an accurate representation of the relevant region of the electromagnetic spectrum.

I do agree with you though that geeking out on this issues is quite fun!